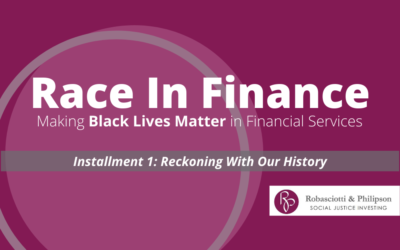 This article is part one of a series about race and racism in financial services. The full series can be read here.

The United States is reckoning with our long history of racism, and specifically how anti-Blackness still shows up today. The financial services industry has a responsibility to consider our role in this moment- both our industry’s role in how we got here, and how to work towards the equitable and just financial system our country needs.

This national conversation about systemic racism follows many other moments of protest and organized movements. The struggle to dismantle racial inequity isn’t new, but this particular moment is different in scope, as the Black Lives Matter demonstrations move worldwide, and public policy changes in ways that were not imaginable even a month ago.

Even corporate America is coming to terms with its history of racism, and the legacy of that history that is still present today. As Quaker Oats renames their Aunt Jemima syrup, the NFL finally supports Colin Kaepernick, and corporations issue solidarity statements (that we hope will be followed by action), will financial services companies and professionals step up in a substantive way?

Right now is our industry’s moment to be honest, bold, and visionary. But first we must reckon with our own history. Our industry was the distribution and management system that allowed slavery to function as an economic model. What is now Wall Street was built by enslaved people and became the home to the official slave market1 for New York, and the first American bond market started with enslaved people as collateral for lending2. Today, we manage and distribute wealth that was largely accumulated by land theft and built with slave labor. These are tough truths to grapple with, but we must. Our responsibility is vast.

From the 1600-1800s, 90% of Indigenous people were killed by either warfare or disease inflicted by European colonists. This mass extermination resulted in the European-American seizure of 1.5 billion acres of stolen land3, much of which was filled with existing indigenous infrastructure, cities, and trade networks4. With the remaining land, treaties were written and subsequently broken. Today Indigenous people are often erased in our national conversations, and not included when we collect race data5. Unsurprisingly, indigenous representation in finance is almost non-existent.

From 1619-1865, Europeans also prospered from the Trans-Atlantic slave trade. People from Africa were traded and treated as property to provide free labor to growing governments and businesses. Black women were often forced to reproduce more Black Americans born into slavery. Though it is estimated about 400,000 enslaved Africans were brought to the United States, slaves numbered 4.4 million by Juneteenth in 18656. Those enslaved people provided 250 years of free labor for the profit of the white landholders and business owners. Much of the monetary wealth that our industry manages today was originally created on stolen land by slave labor7. These practices only formally ended 150 years ago but were immediately followed by Jim Crow laws. Though slavery and Jim Crow laws are now illegal, race-based oppression continues to exist in different forms through tenuous tribal recognition, drug sentencing disparities8, and mass incarceration.

Capital markets, philanthropy, and financial services are the same distribution system that supported these not so distant practices, and which to this day uphold legacy effects of institutional racism9. Financial wealth continues to be predominantly white because our industry has recreated racial barriers (e.g., redlining10) for Indigenous and Black people that are versions of their predecessors. These practices add up to an enormous racial wealth disparity11 in the US. To change the systems of wealth and money in the US, we have to change who has access.

What Can We Do?

Many financial institutions and investment firms have released statements denouncing racism. Some speak to initiatives of diversity, equity, and inclusion that address staffing and customer outreach. While changing our hiring practices and outreach to be inclusive is good, those updates alone do not meet the need for structural change in finance. The systems and beliefs we rely on are still exclusive and inequitable.

The underlying cause for financial services’ lack of substantive progress is that our leaders and industry decision-makers do not see the barriers to entry, because they have not experienced them. To work towards change, we must recognize who isn’t here. Those people most negatively impacted by our industry are experts about the challenges we face, and those people are not in the room. The people that know what needs to happen to create a diverse, inclusive, and equitable financial system aren’t included, so how can we hope to change? We must correct for the vast divide between those who know the systemic solutions and those who have the power to implement them.

At Adasina Social Capital, we use several strategies to move the industry toward a more just system. We’ve seen such overwhelming interest in our Stop Funding Systemic Racism post that we want to share more of our process, so everyone in our industry can benefit. Over the next several weeks we will release a series of articles that address pragmatic steps investment managers, financial planners, bankers, and other financial services professionals can take to move our industry toward justice and the systemic changes we need. Some of the themes we’ll cover:

Stay tuned for more from us on this topic. We’ll share all the articles on social media with the hashtag #RaceInFinance, and you can subscribe to our newsletter here. In the meantime, please look at the variety of changes the Racial Justice Investing Coalition suggests for moving towards justice in our industry.

Learn more about our social justice investing strategy. To read more installments of the series, go to the Race In Finance series page.